One of Charles Poliquin’s favorite books, one that he often gave as gifts to his best students, was Strongman: The Doug Hepburn Story by Tom Thurston. Coach Poliquin admired not only the man but also his methods.

A fellow Canadian, Hepburn was born in 1926. He was born cross-eyed
with a club foot, disabilities that made childhood difficult. Hepburn came across the famous Charles Atlas (Angela Siciliano) Dynamic Tension bodybuilding course and directed his attention toward that.

At the time, three lifts were held in weightlifting competition: standing Olympic press, snatch, and clean and jerk. In 1948, Hepburn entered his first competition and Olympic pressed 300 pounds, unofficially breaking the Canadian record.

Fast forward to 1953 and the World Weightlifting Championships.
Competing as a super heavyweight (over 198 pounds at the time),
Hepburn won gold over John Davis, a US lifter who two years earlier
became the first man to clean and jerk 400 pounds. On his way to victory, Hepburn broke the world record in the Olympic press with 371 ¼ pounds. 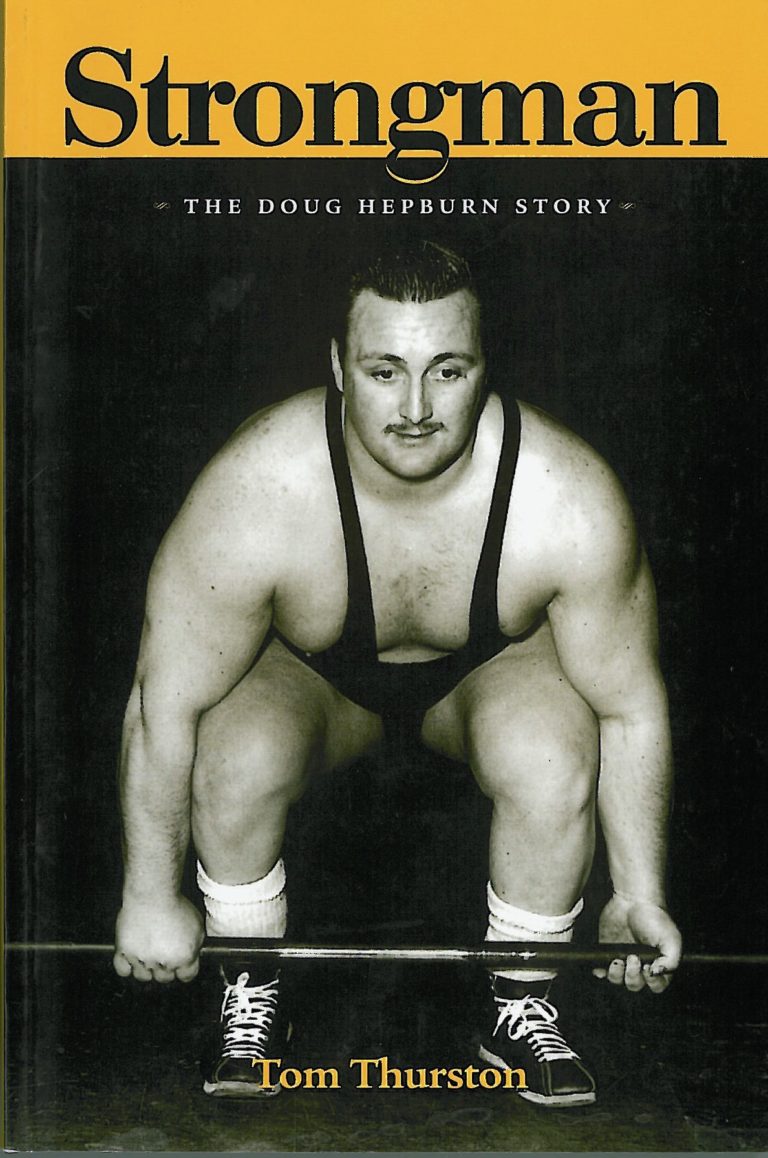 Hepburn continued to improve, eventually recording best lifts of 381 pounds in the Olympic press, 300 pounds in the snatch (using a split style that compensated for his club foot), and clean and jerked 383 pounds. His Olympic press was limited by how much he could clean, as evident by an Olympic press off the rack of 450 pounds and a push press of 500 pounds! (Consider that it wasn’t until 1970 when Vasily Alexeev became the first to clean and jerk 500 pounds.)

While training for weightlifting, Hepburn also performed strongman shows. His performances contained odd feats of strength, such as crushing oil cans, along with traditional lifts such as the bench press and the squat. Here are the best lifts Hepburn claimed (in pounds):

Strongman is written in the first person (with the help of Tom Thurston), contains 295 pages, and is divided into two parts. The first 244 covers Hepburn’s life. This story includes many hidden gems, such as his comment about the mindset of a champion. “The preferred state of mind for ensuring maximum performance during a competitive event is to be 99 percent certain that you can win, but one percent afraid that something could go wrong at the last minute to cause you to lose! It is this fear factor, almost a panic, that most often makes the difference in a hard fought competition.”

The second part contains 10 Appendix, with several outlining his training methods, along with sample workouts. Coach Poliquin frequently talked about Hepburn’s pioneering training methods, many that were considered controversial in his time. For example, he believed in performing a high number of sets to develop maximal strength, and as such limited his training to focusing on just two lifts a day. He also believed in starting workouts with relative strength methods, followed by functional hypertrophy. Strongman: The Doug Hepburn Story is a fascinating book that fans of the Iron Game will cherish.

[You can purchase Strongman: The Doug Hepburn Story through Amazon.com.]

If you haven’t already, join the Dojo of Strength for monthly programming, exclusive articles & videos from Charles Poliquin & our team of coaches, & access to our private community of coaches from around the world!