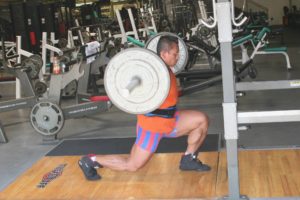 Squats are the single best exercise for adding mass to the legs, no question. That said, I have seen many of my sprinters, jumpers, and bobsledders add inches to their already muscular legs by supplementing their squatting workouts with split squats.

Split squats are a mass builder for the quads, but also work the glutes, hamstrings, adductors, and even the calves. They also provide plenty of leg growth stimulus on days when your lower back needs a break from heavy squatting and deadlifting.

I often prescribe split squats to help my athletes achieve structural balance, such that the strength of each muscle is relatively balanced to avoid putting excessive stress on the joints and connective tissues. One example is the strength of the quads versus hamstrings.

If the strength of the quads is relatively stronger than the hamstrings, the risk of knee injuries increases. In season, my alpine skiers can easily maintain or increase their quad strength with one training session a week due to the stress their sport places on these muscles. However, to maintain or increase their hamstring strength to prevent structural imbalance, they needed at least two training sessions per week. Further, I would often have to put my skiers on a hamstring specialization program to maintain the optimal quad-to-hamstring strength ratio.

Here is how to perform split squats with a barbell properly:

The barbell split squat is just one variation of this exercise. To change the resistance curve on this movement, you can hold dumbbells, position the barbell on the traps, keep the barbell on the clavicles using a front squat grip, or hold a single handle hooked to a low pulley using the contralateral hand. You can also elevate the front leg to increase the range of motion.

Split squats provide plenty of leg growth stimulus on days where you may want to overload the spine by squatting or deadlifting. Keep squatting, but be sure to add some split squats to your exercise toolbox.