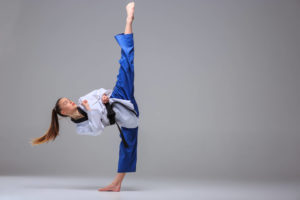 Ballistic stretching has gained an undeserved bad reputation, thanks to some physical therapists and athletic trainers who claim it’s a sure way to injure yourself.

If ballistic stretching were so stressful, every martial artist who emphasizes kicking in their style (Tae Kwon Do, Hapkido, Savate) would be dead, as would every rhythmic gymnast, artistic gymnast, ballet dancer, and diver. When performing the snatch lift, elite weightlifters rapidly position their bodies in extreme ranges of motion under load (some over double bodyweight!), and as such they are performing ballistic stretching. Nevertheless, the injury rate in this sport is relatively low.

Ballistic stretching, also called dynamic stretching, is a staple of their physical preparation. When the Philadelphia 76ers won the NBA championship in 1986, their strength and conditioning coach was a ballet teacher who used plenty of dance movements to teach the basketball players how to use the concept of acceleration and learn to relax the antagonistic muscles.

Ballistic stretching involves fast movements that place the muscles under a rapid, but very short-lived, stretch. Opponents of this type stretching will argue that the imposed stretch is too small in terms of time to be beneficial and increases the likelihood of muscle pull. These people fail to understand that the correlation between dynamic flexibility and static flexibility (r=0.42) is quite poor. As such, it’s possible that someone who can barely touch his mid-shins in a sit-and-reach test (static stretch) can kick you in the face (dynamic stretch). Similarly, someone who can go beyond his feet in a sit-and-reach test may barely be able to kick you in the navel. 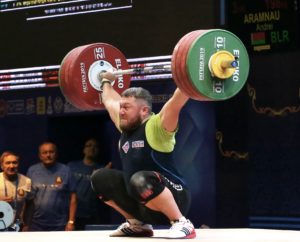 The snatch is an example of a ballistic movement performed under load. Photo by Tim Scott, LiftingLife.com.

In the dynamic expression of flexibility, there’s more involved than the ability to relax the muscles and connective tissue. It also requires the ability to activate the antagonist muscle to put the muscles in a rapid stretch. Using our kicking example, you may able to stretch your hamstrings well in a slow sit-and-reach test, but you may not be able to activate the quadriceps at high speeds to place the hamstrings in a rapid stretch.

There is a correct way to perform ballistic stretches, however—the pendulum method. Don’t try to reach maximal range in the first stretch. Instead, build up to it so you are always in control of the movement. For example, to warm up for a high kick, you’d first kick at the ankle level for starters, then aim at mid-shin, the kneecap, and so on until you reach your maximal kicking height. But you definitely wouldn’t start with your best impression of a Jean-Claude Van Damme kick.

Of course, there are some weight training exercises where ballistic stretching is not appropriate—I certainly wouldn’t advocate bouncing the barbell off the chest in the bench press. I also don’t recommend bouncing out of the bottom with maximal loads in the squat, but consider that during the snatch and clean, the athletes are rebounding out of the low squat.

Stretching isn’t just about reducing injuries, it’s also about improving athletic performance. Determine the requirements of your sport and design an appropriate stretching program for you!