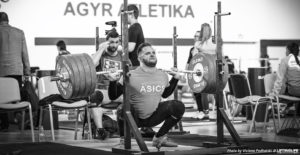 The heaviest clean and jerk of all-time belongs to Leonid Taranenko, a Russian who clean and jerked 266 kilos (586.4 pounds) in 1988. This lift required incredible leg strength, and the weightlifting community took a particular interest in his leg training workouts. Before getting into his “secrets,” let me explain what he didn’t do —or, at least, what he didn’t do that often.

In the early 90s, Bulgarian weightlifting coach Angel Spassov gave a series of lectures in the US where he stated the Taranenko no longer performed squats. Instead, he replaced back and front squats with step-ups and a rear-elevated split squat. And in a 1989 article in Muscle and Fitness, Spassov claimed that “…it has been at least four years since Taranenko has done a back squat of any kind. Besides his practice on the snatch and clean and jerk, the only form of heavy leg training that Taranenko does is the high step-up with weights.” Nice story, but it simply wasn’t true.

Andrew “Bud” Charniga, a prolific writer on Russian training, asked Taranenko about Spassov’s claims. Taranenko said that yes, he would perform step-ups when his back was fatigued, but he didn’t stop squatting. Taranenko told Charniga that he had never discussed his training with Spassov and that he never stopped squatting. Besides dispelling the step-up myth, what got me interested in Charniga’s conversion was that Taranenko said he had back squatted 837 with a two-second pause at the bottom! That statement got me interested.

Based on bench press research, it takes about four seconds to dissipate all stored elastic energy created during an eccentric contraction. Powerlifters pay specific attention to the pause position in the bench press, as pausing just one second longer can significantly reduce how much weight they can press. But as with any other stimulus, varying the pause has an added benefit.

Pause lifts are best suited for general preparatory work. I found such training protocols valuable when I trained elite Canadian alpine skiers, so their vastus medialis oblique (VMO) received a greater overload. The VMO, the tear dropped-shaped muscle on the quads that crosses the knee, and skiers need to develop it to protect the knee. Likewise, mixed martial artists, wrestlers, and judokas can help prevent a host of knee injuries by regular use of pauses in the bottom for squatting exercises.

This is not to say that using the stretch reflex is bad, but that it is a good way to train the squatting musculature. All forms of squats improve faster when you vary their tempo frequently.

These types of stretched position pauses are best suited for the training of extensor chains such as squats and presses. For example, if your incline press has not moved up in load for ages, holding the stretched position for 4 seconds will create a valuable form of eustress that will boost your strength levels.

If there is an exercise where pausing in the stretched position has a plateau blasting effect, it’s dips, especially when performed on rings. Also, pausing in the bottom position in deadlifts prevents the trainee from bouncing the bar off the floor and reinforces better spine alignment, which in the long run boosts deadlift strength. 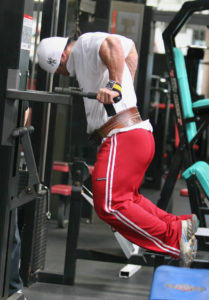 Pausing in the bottom position of extensor-chain exercises such as dips has a plateau blasting effect.(This photo by Miloš Šarčev. Lead photo by Vivian Podhaiski, LiftingLife.com.)

When using pauses that are so lengthy, restrict the reps per set to 2-4. Because the time under tension is greater, you would do as fewer sets. For example, 8 sets may be required when you do your dips on a 40X0 tempo, but only 5-6 sets are needed when the tempo is 34X0.

If you are going to have a long pause in the stretched, biomechanically disadvantageous position on presses, squats, and deadlifts, you want to make sure to take an eccentric lowering of 3 to 4 seconds to set the bar properly. The concentric range in that type of training should be performed explosively (as indicated by the “X” in the tempo prescription). For obvious reasons, especially in pressing exercises, the use of a spotter is crucial.

Variety is essential to ensuring continual strength gains. One way to achieve such variety is by prolonging the pause position of many of your favorite lifts.