Insight into a popular textbook on weight training basics

The Iron Game is full of strong personalities. Some good. Some bad. Some that just won’t go away. Mark Rippetoe is all three.

Rippetoe is the author of Starting Strength: Basic Barbell Training, a total program book that teaches the most result-producing barbell lifts to get strong. Written for a general audience, it’s a good starting point, especially for high school athletes. Now let’s get back to Rippetoe.

Rippetoe was a powerlifter, retiring from competition in 1988. At that time, he switched his focus to coaching at his gym, Wichita Falls Athletic Club. In 1997, his emphasis was on weightlifting, and he had a great mentor in Bill Star, an international-level weightlifter who wrote the Iron Game classic, The Strongest Shall Survive. 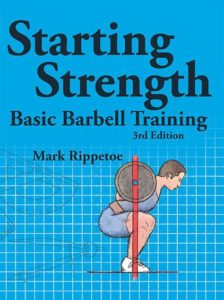 To say that Rippetoe is outspoken is a bit like saying a tiger is a large cat. He became one of the first to get a CSCS credential from the National Strength and Conditioning Association in 1985. Twenty-four years later, he announced that he would relinquish the credential because he did not like the direction the organization was taking. It would not be the first time Rippetoe has expressed controversial opinions. Consider these
controversial remarks he made about the physical therapy profession, which give you a glimpse into Rippetoe’s personality:

“Why do the arbiters of all things exercise – the members of the Physical Therapy profession – insist that injuries must be rehabbed in a way that is completely different from the way that the uninjured component functions? Why must they divide the body into its constituent components, figure out a way to make that isolated component function all by itself, and then base their rehabilitation exercises on this faulty analysis?

“When does the “rotator cuff” externally rotate the upper arm? When your Physical Therapist hands you the 3-pound dumbbell and carefully explains how to do it. What do these little muscles do the rest of the time? Sleep? Play poker? Why must an injured knee be rehabbed with ‘quad sets’ and knee extensions, when its function is to allow you to squat down and stand back up, walk, run, and serve as a place for your leg to bend?”

And here are a few of his…well, “brash” statements that helped earn him a reputation as a strength coach who is not afraid to upset the applecart:

“If you insist on wearing gloves, make sure they match your purse.”

“There is no such thing as ‘firming and toning.’ There is only stronger and weaker.”

“A squat cannot be performed on a Smith machine any more than it can be performed in a small closet with a hamster.”

As its name implies, Starting Strength is about getting you started on the path to get “Bang your fists on your chest” strong. Squats, bench press, deadlifts, power cleans, and military presses? You’ve come to the right place. Crunches and triceps kickbacks? Wrong book.

Starting Strength is 354 pages of hardcore serious instruction in an 8 ½ x 11, extensively illustrated format. Think you know how to squat? Read pages 7-71, and you might be surprised at what you don’t know. Rippetoe doesn’t miss a detail – there are 3 pages devoted to telling you how to grip the bar!

The book contains eight sections that are self-explanatory:
1. Strength: Why and How
2. The Squat
3. The Press
4. The Deadlift
5. The Bench Press
6. The Power Clean
7. Useful Assistance Exercises
8. Programing


The last section, Programming, is extremely brief for such a complex topic. However, Rippetoe and Andy Baker wrote a book that serves as a companion to this one called Practical Programming for Strength Training: 3rd Edition. As for the nutritional advice in this section, you might want to skip that chapter unless you own a T-shirt that says, “Got Milk?”

Finally, consider that how Rippetoe teaches some of his lifts, especially the squat, conflict with some of the teaching methods of Charles Poliquin. For example, Rippetoe says squat depth is influenced by individual anatomy and that just breaking parallel is fine. Poliquin would rather you do what it takes to have your hamstrings cover your calves. On the other side of the coin, Poliquin would probably heartedly endorse Rippetoe’s extensive discussion of the standing press in section 3. And, unquestionably, Poliquin would appreciate Rippetoe’s dry sense of humor.

Differences of opinion aside, Starting Strength: Basic Barbell Training would be a solid first choice for a high school strength coach, especially those who work with large numbers, followed by the programming book.

Let’s leave you with one more Coach Mark Rippetoe comment that adequately summarizes the contents of Starting Strength, “If you want to look like some Abercrombie model, then find another program and enjoy your nice, easy training style. If you are serious about adding muscle to your frame, then get under the damn bar and make it happen.”

For the latest in training & nutrition, join the Dojo of Strength for monthly programs, videos, and articles from Charles Poliquin and our team of coaches.