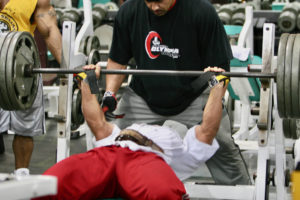 How much attention should football players give to this powerful exercise?

While the squat may be the most important strength exercise for American football, the bench press is unquestionably the most popular. Likewise, sports reporters and their audiences can certainly understand the significance of an NFL lineman bench pressing 500 pounds but are lost when trying to put a 500-squat into perspective. This begs the question, “How important is the bench press?”

Of course, this discussion is not meant for powerlifters, as the bench press is part of their sport. Also, some powerlifters prefer to compete in bench press competitions, placing even more emphasis on this lift. Also, if the federation a powerlifter competes in allows the use of supportive equipment, they need to use that equipment and train with that equipment. As for the best gear to use and how to use it, the best source of information on this topic is powerlifting guru Louie Simmons. Read his books, watch his videos, and if possible, take his seminars.

Before determining the value of any exercise, you must consider that a problem exists if you overemphasize it. Hitting a 400-pound bench press is a remarkable achievement for a high school football player, but what sacrifices were made to achieve that benchmark? If 90 percent of an athlete’s workout time is devoted to improving their bench press at the expense of heavy-duty leg work, that’s not a productive way to train.

Consider the physical requirements of a running back. He must react to the movements of the defense and fend off the charges of the defense. Yes, upper body strength is important, and the best NFL linemen often have tremendous upper body development. Still, it takes a back seat to having powerful legs that can help them break hard tackles. Contrast that with the athletic qualities needed by a linebacker. Yes, they need a strong upper body, but they need to be strong at all angles. One pressing exercise is not going to cut it. 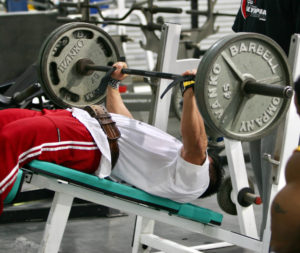 Athletes need to be strong from all angles, which means they should bench press from a variety of body positions. (Miloš Šarčev photos)

Yes, I realize that the 225-pound bench press for max reps is a primary test used in the NFL combine to test upper body strength, but that doesn’t necessarily mean it’s a good test. It’s also more of a test of muscular endurance than absolute strength. In fact, one study on the NFL combine involving 1,155 athletes between 2005 and 2009 found that the tests had little relevance in predicting how well these athletes would perform in the draft.

Next, consider is that the best bench press for a powerlifter may not be the best bench press for a football player. A powerlifter wants to use a technique that enables them to lift the heaviest weight over the shortest distance. One way to shorten the distance the bar travels is to use a wider grip, which increases the stress on the shoulder joints. Just as a wide grip is hard on the joints, a narrow grip also comes with its own problems. What is too narrow?

Biacromial width is the distance between the two bony prominences located on the edges of your shoulders. This grip places the least amount of stress on wrists and elbows. If your grip is narrower than biacromial width, you risk injuring these areas.

Getting back to football, the incline bench press is a better lift because of the angle of the trunk in relation to the shoulders. Football linemen rarely apply force perpendicular to their trunk but with their arms at about a 45-degree angle (upward) relative to their torso. As a general rule, I would limit pressing from a prone position to no more than 20 percent of your volume for pressing exercises. Also, I believe about 50 percent of your pressing exercises, including incline and military presses, should be performed with dumbbells. Dumbbells offer a more natural movement pattern and do more for helping to stabilize the shoulders.

The bench press is here to stay, and it’s tough to beat as a mass-builder. However, football players should not overemphasize it to perform their best on the gridiron.