One book that was not on Charles R. Poliquin’s bookshelf was High-Intensity Training the Mike Mentzer Way, but there are several good reasons it should be on yours.

The Strength Sensei often wrote about his criticism of these so-called “high intensity” training methods. For one, he rejected the name. He believed, as did weightlifters and sports scientists, that intensity is determined by how much weight is lifted. It’s not measured by how much you grunt and sweat, or what type of funny faces you make during a workout. If you can lift 100 pounds for one repetition and lift 100 pounds, your intensity is higher than if you lift 95 pounds or 80 pounds to failure.

It’s not that Charles R. Poliquin didn’t see the value in such training. He believed that “fatigue masks fitness,” and that many bodybuilders were overtrained. Because the high-intensity workouts that Mentzer and others championed were brief, the lower volume enabled them to recover and overcome training slumps. Thus, for short periods, high-intensity worked. 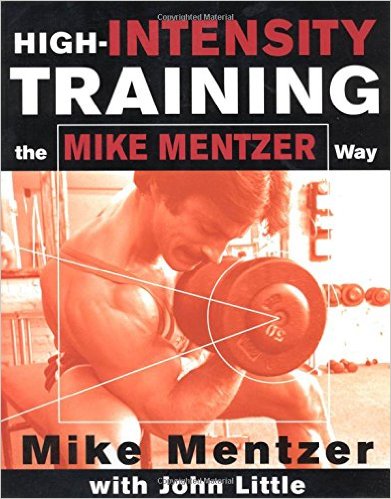 Of course, there are many free online sources available to teach you high-intensity training. If you want to take a deep dive into the origins of this method, read the works of Nautilus founder Arthur Jones, whom Mentzer considered his mentor. If you go to arthurjonesexercise.com, you can access nearly every one of Jones’ articles and books – perhaps as much as a quarter of a million words of content! Love him or hate him, there was no question that Jones was a great storyteller and salesman.

So why invest in a copy of High-Intensity Training the Mike Mentzer Way?

First, consider that John Little wrote this book in 2003. Mentzer died on June 10, 2001, apparently from heart complications. And to add to the Mentzer family tragedy, less than two days after Mike Mentzer’s death, his bodybuilding brother Ray died, reportedly from Berger’s disease. Ray was 47, two years younger than Mike.

During his 49 years, Mike Mentzer became one of the best bodybuilders in the world, and many experts consider him the best physique champion never to win the Mr. Olympia. He also became one of the most influential writers and public speakers in bodybuilding.

Mentzer’s competitive bodybuilding career spanned from 1970 when he won the AAU Mr. Pennsylvania as a teenager, through 1978 when he achieved a perfect score in the IFBB Mr. Universe, and finishing in 1980 when he placed fifth in the controversial Mr. Olympia won by Arnold Schwarzenegger. Arnold was far from his best, and many believed that Mentzer deserved to win. (For an even more extensive account of what happened in 1980, check out Muscle, Smoke & Mirrors, Volume III – Book 1, The Comebacks.)

As for the numbers, Mentzer entered 20 competitions, and won first place in eight of them and second place in six. His brother Ray topped his career with a win in the 1979 AAU Mr. America, reportedly with arms exceeding 20 inches.

For sure, all the basics of Mentzer’s high-intensity training are here: Identity, Intensity, Duration, Frequency, Specificity, Adaptation, and Progression. For advanced trainees, he discusses in details ways to induce more muscular growth stimulation with techniques such as positive failure, force reps, and negative failure. But there is much, much more. Mentzer discusses posing, contest prep, the role of genetics in bodybuilding, the debate on free weights vs. machines, and an extensive section on motivation and psychology.

Yes, this book details Mentzer’s controversial training methods, but also serves as a biography of his career and personal beliefs. As a bonus, its 288 pages are packed with considerable eye candy photos of Mentzer in competition and his daily life.

If you’re a student of the history of bodybuilding and want to learn about one of the most entertaining and controversial figures in the sport, invest in a copy of High-Intensity Training the Mike Mentzer Way! (TSS)

[High-Intensity Training the Mike Mentzer Way with John Little in paperback and a Kindle version through Amazon.com.]