How varying lifting speed can accelerate your gains

One of the most influential men in the Iron Game was Angelo Siciliano, a bodybuilder born in southern Italy on October 30, 1892. You know him best as Charles Atlas.

In 1904, Siciliano move to Brooklyn, New York. He developed a strongman act and promoted himself as “America’s Most Perfectly Developed Man.” In 1922, Siciliano changed his name to Charles Atlas and teamed with British homeopathic physician Dr. Frederick Tiney to develop a 12-lesson home workout program using isometrics called Dynamic Tension.

In the 1930s, a cartoon advertisement promoting the Charles Atlas’s Dynamic Tension course was created that became a staple in comic books. The cartoon showed a 97-pound weakling getting sand kicked into his face, humiliating him in front of his girlfriend. Wisely, the man purchased Atlas’s course, packed on slabs of muscle, and returned to the beach to get revenge on the bully and restore his honor. He became, as the story goes, “A real man!”

Although it’s unlikely that anyone developed a championship physique using the Dynamic Tension course, isometrics has a place in strength training for improving both muscle mass and strength. This leads us to the practice of using tempo prescriptions to design workouts. 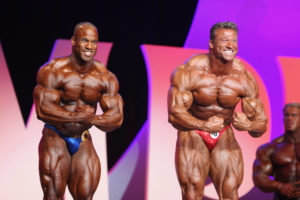 The most muscular “crab” pose is an example of an isometric contraction. (Photos by Miloš Šarčev)

Putting it together, a bench press might contain a tempo prescription of 4012. Translated, this means you would lower the weight to your chest in four seconds, then without pausing with the bar on your chest, press the weight to extended arms in one second and then hold it at the top for two seconds before performing your next rep. If an X was prescribed, such as 40X2, this means that portion of the lift should be performed as quickly as possible.

The Strength Sensei prolonged the isometric pauses in his workout prescriptions to achieve specific goals. Using the bench press example, pausing with the bar on the chest increased muscle tension by dissipating the kinetic energy that would assist in the concentric phase of the lift. This type of pause would promote gains in muscle mass. Such a formula might look like this: 44X1.

To increase force production, a prolonged pause would be taken during the second pause. This brief rest in the strongest position (with the bench press, it would be with the arms extended), enables the trainer to use more weight, thus increasing the intensity of the exercise. This type of pause would promote gains in strength. Such a formula might look like this: 40X3.

The Strength Sensei generally reserved workouts emphasizing isometric contractions for his more advanced athletes. For them, tempo prescriptions with prolonged isometric pauses would represent five to 10 percent of their total training volume.

Beach season is upon us, so follow the lead of Charles Atlas and consider adding isometric pauses in your training! (TSS)