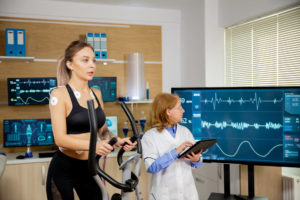 Calling out fitness writers who don’t do their homework

It ticks me off when fitness writers publish articles that misinterpret information from scientific papers. If these writers fail to thoroughly understand their source material, they have no business sharing their opinions about a topic as important as strength training.

The problem with poorly-researched writing is getting worse because it has become easier to get these articles published (ever since Al Gore created the Internet!). In the past, if fitness writers wanted to see their names in print, they would have to go through at least one editor who would screen their material. Because there was competition for this coveted print space, often only the best articles were published. Now, pretty much anyone can get their articles published or, better yet, build a website and avoid any screening process!

The primary issue here goes beyond having good intentions and common sense. Fitness writers need to learn how to evaluate the value of research studies and the significance of such phrases as, “Based on the limits of this study…” This type of analytical skill is taught in every first-year exercise science class – at least, it was when I went to college.

You’ve got to read the entire research paper, not just the abstract, to determine its limitations. Maybe then you’d find out that perhaps one reason “statistically significant improvements” were made with so many “one-set-per-exercise” training protocols was that the studies often lasted only a few weeks or used untrained subjects. Understand that, and you’ll realize it doesn’t necessarily mean that the same workout will enable different subjects to make linear increases in strength and quickly challenge world records – or that an elite athlete will make any gains on the same system. Let’s look at a real-world example.

Two highly-touted research studies were conducted in the 1970s by Nautilus inventor Arthur Jones. His 1973 “Colorado Experiment” involved workouts consisting of low volume, high-density training sessions. The big news about the Colorado Experiment was the amazing before-and-after photos of Casey Viator, a former Mr. America who participated in the study.

Viator, who had lost a considerable amount of muscle mass due to detraining and a reaction to penicillin (which nearly killed him), quickly returned to his top form. As dramatically illustrated in the photos, Viator gained 63.21 pounds of solid muscle in four weeks! Does this mean if Viator had trained another four weeks, he would have developed muscle mass to a level that would have dwarfed eight-time Mr. Olympia Ronnie Coleman? Of course not.

Two years after the Colorado Experiment, Jones followed up with a six-week study of West Point football players. Using the same training protocols Jones used with Viator, the study involved college football players who had just finished their football season. Naturally, they were down in strength and as such, made what appeared to be great results with the unique training protocols. However, much of the strength and muscle mass gains reflected the players’ return to their pre-season levels. 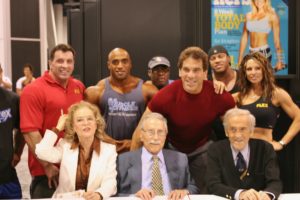 Miloš Šarčev (top left, red shirt) is a fitness writer who has “walked the talk,” twice placing in the top 10 in the Mr. Olympia. In this photo from Milos, you will see many giants in bodybuilding, including magazine publisher Joe Weider (center, bottom) and his brother Ben (bottom, right). How many other bodybuilding celebrities (or Incredible Hulks) can you name in this photo?

Several decades ago, much attention was focused on finding the optimal training protocol for sets and reps. A study might compare 3 sets x 10 reps to 3 x 5 and 3 x 3, and conclude that 3 x 5 is a superior protocol for developing strength. Such a study would be wrong from the start because there is an inverse relationship between sets and reps. It would have been more appropriate to compare 3 x 5 to 5 x 3, but that comparison still would have problems because the researchers were looking for the single best workout program. Perhaps a program that alternated between those two set/rep combinations would have proven superior to using just one set/rep protocol?

Sometimes studies don’t look at whether a one set/rep protocol is best. Instead, they look at whether weight training is superior to other types of training — or even to no training at all! For example, one study on swimmers found that adding three weight training workouts to their training did not significantly improve swimming performance. Now, that was an exercise in futility if ever there was one.

Because swimmers are often grossly overtrained, adding additional workouts (whether it be weight training, plyometrics, or even performing Tae Bo) would undoubtedly make them even more overtrained! In this case, the appropriate guideline should have been, “If you’re going to add something to a workout, you have to take something away!”

On the other end of the spectrum, overtrained bodybuilders often find they can make significant gains for brief periods on low-volume training programs. It’s not because this is a superior approach to training, but simply because they were overtrained. Remember, fatigue masks fitness!

I always tell my students, “The more you learn, the more you earn!” It’s true, but you have to think twice about the value of many articles written by today’s fitness writers.