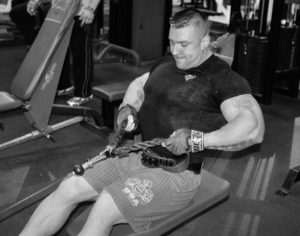 The importance of rowing for maximum growth and structural balance

As with calf raises, rows have become one of the most neglected exercises among those who lift weights. Lat pulldowns (and maybe a set of chin-ups with bands), certainly. But full-range, heavy rowing movements to build a strong and thick upper back, maybe not? Perhaps one reason for this attitude adjustment is that we got distracted.

In 1956, a program called The President’s Council on Youth Fitness was founded to encourage American children to exercise. Later this organization created presidential awards, and one test for boys to receive these awards was pull-ups (and a flexed-arm hang for girls). Likewise, one performance test for the military, and a primary training exercise, was pull-ups. For the general population, especially the overweight or poorly conditioned, pull-ups and chin-ups were replaced by lat pulldowns. This exercise’s popularity is such that today you would be hard-pressed to find a commercial gym that did not have a lat pulldown machine. And perhaps because pulldowns are so much easier, it’s rare to find anyone in commercial gyms performing chin-ups and pull-ups.

Another distraction for optimal upper back training was Nautilus founder Arthur Jones and the revolutionary pullover machine he introduced in 1971. Jones referred to his unit as the “upper body squat,” claiming that it was the single best exercise to develop the lats. Jones said his machine was superior to conventional pullovers and other upper back exercises because it provided direct stimulation to these muscles by eliminating the involvement of the arms and grip. (However, in his early catalogs, besides his pullover machine, Jones sold a “torso-arm machine” that was essentially a lat pulldown machine.)

The result of these distractions is that exercises such as rows were often forgotten by the general public and athletic population, except for cardio rowing machines (that often collect dusk in many health clubs in favor of treadmills, elliptical cycles, and stair climbers). Don’t get me wrong. Chin-ups and pull-ups are great exercises, but they are not enough to achieve structural balance in the upper body. Especially if you perform bench presses — lots of bench presses.

Bench presses strengthen the pectorals and anterior deltoids, muscles that pull the shoulders forward. Overemphasis on this exercise (at the exclusion of back exercises) can cause round shoulders, which will chronically stretch the infraspinatus and teres minor muscles. This structural imbalance can lead to shoulder impingement syndromes and increase the risk of shoulder dislocations. Consider that one function of the latissimus dorsi is internal rotation of the upper arms, which is why competitive swimmers and gymnasts often display a round-shouldered posture.

To correct round shoulders and achieve structural balance, one of my favorite exercises is the face pull. This exercise, which could be classified as a standing horizontal row, strengthens the middle trapezius (that adduct the shoulders) and rhomboids. I take the exercise a step further by finishing the face pull with an external rotation of the shoulder, thus strengthening the infraspinatus and teres minor.

As for seated, horizontal rows with a pulley unit, I prefer those units that offer a variety of cable attachments to work the upper back muscles from a variety of angles to ensure that all the motor unit pools of this muscle are trained. For example, for one training phase, I might use a V-handle attachment that has my hands facing each other with a close grip. For another training phase, a straight bar enables me to use a wide grip. The bottom line is that you can’t rely on just one exercise to develop a muscle fully. 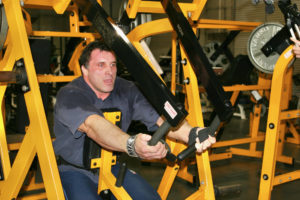 I also like many of the seated rowing machines on the market, particularly the Atlantis Diverging Row. The lever arms are independent, which makes them especially useful for rehabilitation, and the handles rotate. Variety is essential for progression in strength. Being able to perform rowing exercises with pronated, supinated, and semi-supinated hand positions is one way to ensure variety in your training.

One last point: I seldom prescribe the bent-over barbell row performed from a standing position. You must expend considerable neural drive in firing the glutes, hamstrings, and erector spinae to maintain the optimal posture during these exercises. I prefer a one-arm dumbbell row with one foot braced against a bench. This position enables you to put more effort into the upper back muscles you want to strengthen, along with working these muscles through a greater range of motion.

Rowing exercises may have lost their popularity, but that doesn’t mean they are any less valuable. Add some rows to your training to ensure total body strength, impressive upper back development, and healthy shoulders!